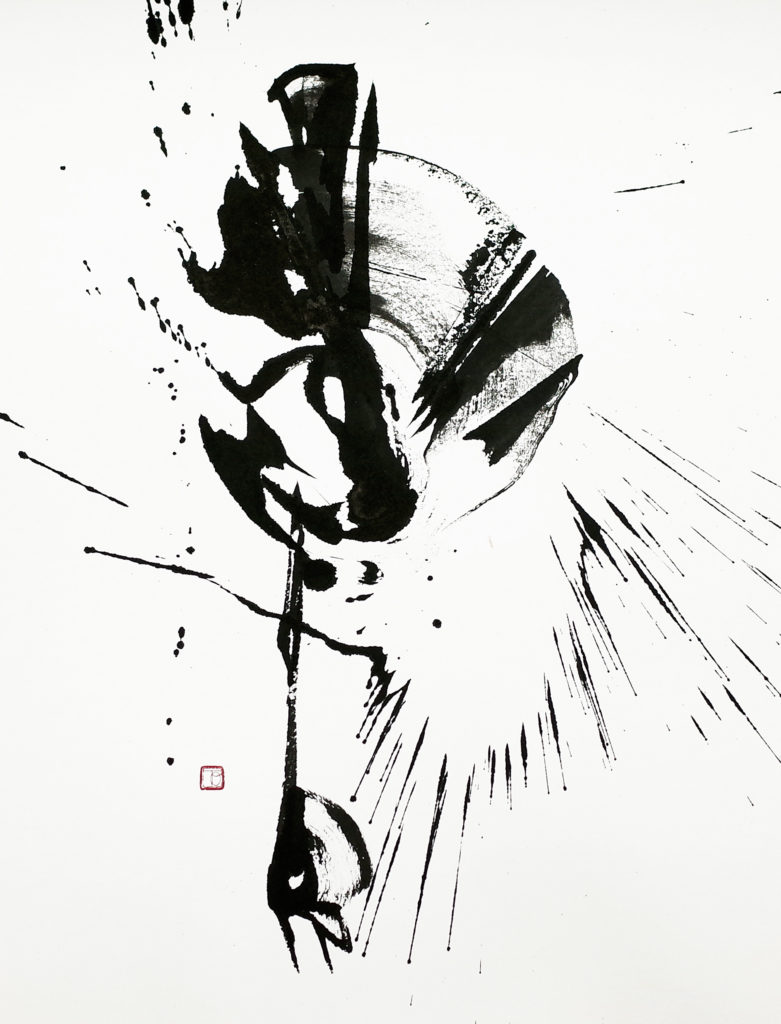 Sogen Chiba, is a Japanese Calligrapher, from Ishinomaki in Miyagi. He started learning calligraphy –Shodo in Japanese – in his childhood. Under his generous master, he could invent his original technique though he was still young. He has developed his unique world of creation.
One of his skills is the “Spiral Splash”, that is to swing the stem of a very long and thin brush, intentionally to splash the ink and to draw the spiral form of it. Sogen developed the tool called ‘Cho cho ho’, which means very long brush himself.
This skill is not just swinging the hand with the brush, but drawing the line by twisting and rolling the wrist flexibly at the centre of the round cross section of the brush stem as a starting point, so that the swinging force is amplified toward the point of the 30 cm brush, much longer than a regular sized one and the ink is scattered momentarily. The form of the splash can be controlled by Sogen’s techniques.
The theme expressed by the “Spiral Splash” is about the cosmic and the spiritual, large scale thing beyond human wisdom, such as explosive phenomena like the Big Bang, and the Phoenix.
When the Great East Japan Earthquake occurred on March 11th, 2011, the tsunami carried away more than 100 of his works. Included is his masterpiece, the length of which was over 10 meters and was stored in Kesennuma. He, however, took action to hold the large scale solo exhibition in Tokyo and Sendai. The theme was “Requiem and Revival” for the disappeared.